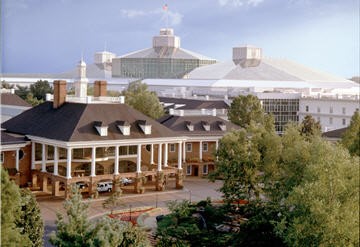 Over the years many different renovations have taken place. Below are the more major projects.

All 2800 rooms have been renovated with new power and lighting. These projects were done in short time frames while the rooms were removed from service on floor by floor basis. On average, 15 rooms were completed and put back on line each day including replacement of the furniture.

The project consisted of adding a new Spa over the existing Cascades Entrance Port a Cohere. This included treatment rooms and a new indoor Pool with under water sound systems. The power service was expanded from the existing 25kV service approximately 600 feet away in the existing parking lot.

This project removed an existing original restaurant and kitchen and converted it into a high-end New York style Night Club. The kitchen area remained on line during the project to service the Ballrooms and Meeting Rooms. The project consisted of custom Light Columns made the match to the finishes and included LED Dimming Controls for Interactive Lighting Sequences with the Music. The Bar Area included LED lighting Systems as well as Lighting systems in the Vodka freezers. LED lighting was installed in the custom coves above the Seating Area.